If Arjen Robben had been halfway as adept with his feet as his mouth — has any participant at the World Cup jawed as much as this whiny wonder? — he might actually have slotted those two glorious chances he had to beat Iker Casillas…

I can’t believe Robben is still at it, criticizing the World Cup 2010 Finals referee and saying Puyol should have been sent off. More details on Robben’s complaint here. Sorry Robben, but that’s what you call Karma. 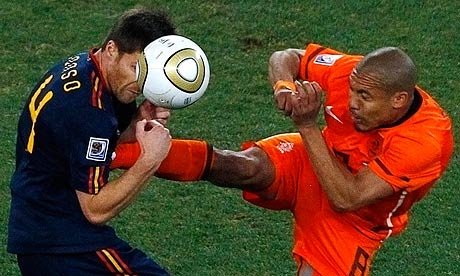 De Jong's kung-fu kick into Xabi Alonso's chest was only given a YELLOW card.

Robben IS right to complain about the referee’s performance, he did not do his job as well as he should’ve because he was too lenient with the Dutch despite how physical they were playing (complete details on Referee Howard Webb’s calls here). It’s obvious that the Dutch played much dirtier than the Spanish. They should have gotten a red card much earlier than they did when De Jong kicked Alonso right smack in the chest!! He wasn’t even trying to kick the ball, he was just kicking straight at Xabi’s chest! Did that look like an accident to you???  De Jong should be ashamed, he could have killed the guy if that kick had landed on Xabi’s neck. I hope FIFA sanctions him further for this!

But hey at least the Spanish fans know their team won because of skill, not by trying to injure their opponents! As for the Dutch’s attempt to win, I wanna quote Dan Jones of The London Evening Standard by saying “to do it by trying to break their (Spanish player’s) ankles was unsavoury.”  View full article of Dan Jones here.

If English referee Howard Webb really was playing his cards right, Holland would have been down to nine players before the game ever slogged into extra time.

“And regrettably, sadly, they played very dirty. So much so that they should have been down to nine immediately, then they made two [such] ugly and hard tackles that even I felt the damage.”

– Johan Cruyff, heart of Holland football team in the 70’s 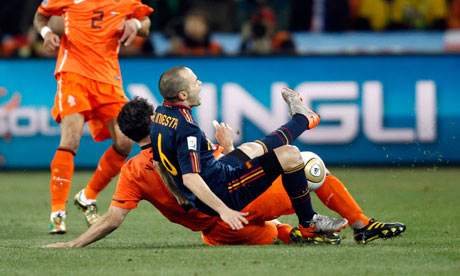 By fair means and foul play, Holland blocked Spain’s route to goal. Kuyt almost ripped Gerard Piqué’s shirt off at a Spanish corner. Wesley Sneijder, hitherto anonymous, decided to stamp himself on Busquets, rather than the game, planting his studs in the midfielder’s thigh.