This isn’t a movie review. I think everyone knows it’s a good movie already. So if you don’t think so, feel free to skip over this post. =P These are my random thoughts on such a thought-provoking film.

I am so glad that I watched this movie without a clue of what it was going to be about. All I knew is that it was somehow related to dreams.  I didn’t look for reviews or summaries, etc., etc. Some people can’t wait to know what happens, but I prefer to let the movie unfold before my eyes and just enjoy the ride. If you’re not quite sure what’s happening, then maybe that’s part of the movie’s magic. There were moments when I almost forgot which layer was what and who was dreaming which. But who cares? Isn’t this why we love these movies? Because it’s such an awesome mind-F! The movie has taken my respect for Director Christopher Nolan to a whole new level! (Way past superheroes)

And sometimes in this jaded age of know-everything-via-the-internet, it’s such a relief that we can still be baffled and confused by a movie… that there are still filmmakers who can create something so unexpected, so not mainstream… and make something as common and ordinary as a dream so interesting… to bring it to the forefront of our consciousness…. and to make us ask questions that we never thought to ask before…. that it can even eff-up the ‘smartest’ of us. That’s creative genius right there!

Photo of Leo Dicaprio, Director Christopher Nolan and Ken Watanabe from a Japanese Publication while they were shooting in Japan

Spoiler alert. If you haven’t seen it, then please do not continue reading and watch the movie now!

My favorite part of the movie is when The Mark (Robert Fischer) finally goes into the vault and sees his father. The words that came out of the father’s mouth was priceless! The way they twisted the negative last words (“Disappointment”) into something so positive and inspiring that I couldn’t help but be overjoyed at 1) how well they choreographed the inception, 2) how perfectly chosen the words were and 3) and the simplicity and elegance of the idea implanted!

From a marketing perspective, this was absolutely brilliant! It was The Brilliant Insight into the Target Audience (in this case Robert Fischer) that would lead him to “buy” into the concept of selling off the entire company! MARKETING GENIUS I tell you! Of course he was SOLD!!!

The planning that the Inception Team went into, is what any company-advertising agency undertakes whenever they are selling you a “product.” And the execution, is what all these brands/stores/multi-nationals/conglomerates hope to achieve: the implantation of an idea so simple and in such a convincing manner that it changes your actions or purchasing behavior – well in this case it was the Fischer’s selling behavior. Wow in that moment, when Robert Fischer’s face lit up (light bulb moment!), I wanted to clap! Hahaha! Sorry I know it all sounds very dorky… but I can’t help it! I am a marketing person at heart. =P

So glad that gone are the days when Leo was not taken seriously because he was deemed too pretty. At 35 he is finally looking the great parts he's playing, and no longer looks like just another pretty boy!

A matured Leo is now taken very seriously as an actor - too serious perhaps? Apparently he's going to take it easy for a while after doing such heavy films as Shutter Island and Inception.

Holy mother of...!!! Joseph Gordon Levitt for the win! This role definitely put him in MY map =P I bet James Franco is kicking himself for not being able to do the role because of scheduling! JGL = BADASS.

I absolutely loved the tandem of Joseph Gordon-Levitt and Leonardo DiCaprio! 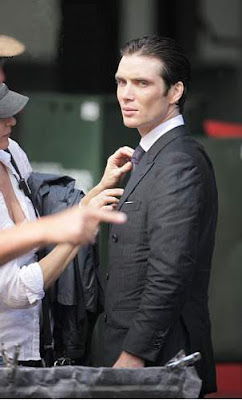 The cherry on top: Cillian Murphy and those hypnotic blue eyes

I love that the ending is open to interpretation. But of course everyone wants it to be real for Cobb. Despite such an industrial setting and the modernity of it all – everyone just wants to go home. Yes hi-tech heist and all, in the end we’re all still cheeseballs – and love is still at the center of it all.

My only regret is that we weren’t able to watch Inception in IMAX. Why oh why isn’t there IMAX in Jakarta?!? Oh and that Ellen Page looked too young to be a graduate student.

So what did you think? Any thoughts on Inception?