My friend forwarded me this article from The Jakarta Post:

Indonesians living and working in Malaysia are concerned they may not be able to spectate at the Asean Football Federation Cup final first leg on Dec. 26 because the host nation may reserve the vast majority of its tickets for Malaysians.

Anshari, a worker from East Java, said he had started looking for a ticket on Tuesday to ensure  he could attend the match.

“I am afraid of not being able to get a ticket,” he said as quoted by Tempointeraktif.com.

Ali Hisyam, an Indonesian student in Kuala Lumpur, said he was also scouring for a ticket.

“I have called the local soccer association, they said the tickets will be available on Thursday,” he said.

Our tickets for Leg 1. Thanks to the generosity of the Football team & our friends in Nike!

Let me tell you of our experience getting tickets for the Philippine vs Indonesia Home and Away matches.  We knew that diplomats from other countries were given tickets during their own games in the Bung Karno Stadium, so we officially requested for tickets for my husband’s office. When my husband came back all he was told was that there were no more tickets. Our embassy on the other hand, just bought VIP tickets ($35 est./ticket) with their own money just so they could watch. The VIP section in this stadium is the portion beneath the bleachers so it’s difficult to term it VIP at all.   Plus, there is no assigned seating in Bung Karno Stadium.  We have a sneaky feeling that either a lot of people snuck in or tickets were over sold.

The Philippine Team/Azkals requested for 500 tickets for the “Home” game/first leg as well. You know how many were given to them the day of the game? 75 tickets. This covers their support staff, family and other supporters. They weren’t given great seats, and they weren’t even all grouped in the same location. I guess they gave whatever left over tickets they had.

So the “Philippine Contingent”, if you can even call it that, was scattered throughout the stadium during the game. Unfortunately, some Filipinos did not have a good experience at all. They were only giving support to our team (just as the Indonesians were) by bringing their flags and waving it in the air, but they were thrown water bottles for it. Others were also booed and given the finger. According to one man, he was never given the finger by this many kids in his life! After that they neither felt safe nor comfortable to cheer for our team. And when the water bottle throwing continued they were forced to leave before halftime.

One Filipina said the water bottles (which were filled) came from the rowdy bleachers. They weren’t dropped but targeted and thrown at them with force. The first one just missed her head and grazed her hair. The second one hit her thighs. After that they went home.

Because of this experience, most of the Filipinos decided against going to the stadium to watch the 2nd leg in person. Besides even if they wanted to they couldn’t get tickets either. My husband tried to buy, but was told it was sold out already. It’s funny because there are TWO teams in the game, but only one side had control of the tickets and was in a position to arbitrarily decide on their allocation. Not very fair is it?

The team, knowing they wouldn’t be able to request for many tickets, just asked for the same amount: 75 tickets. They also requested that even if they were given fewer than expected, to please make it in the same area for the safety of the Filipinos watching. Do you know how many they were given? 32 tickets. What’s worse is not just that they were bad seats, but again they were in different parts of the Stadium (i.e. 3 would be in the class B, 4 would be in class A, etc).  Basically in the stadium which was filled to 85,000 that night, (aside from the team itself) there were only a few dozen  Filipinos in that stadium.

I understand how this situation would happen during and AWAY game. But for the HOME game (which the deposed President Martinez unwisely gave up)??? It was really the wrong move. What on earth could have possessed Martinez to do this? Or should I say “what does he now possess because he did this???” Thank God he is officially ousted! (Good to know: prior to this issue, Martinez was already facing charges of corruption in the PFF) 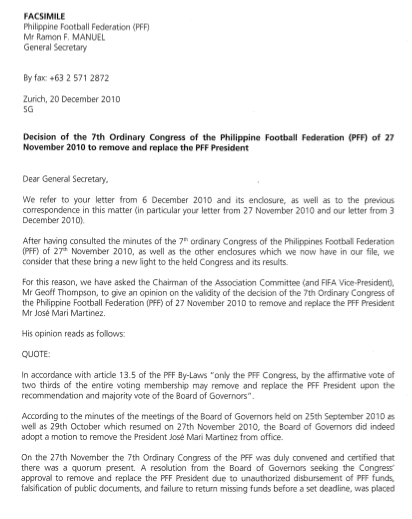 This is what is really pissing me off, that for the HOME game we should have had home court advantage. Just like Malaysia has now. And the Azkals should have been able to experience it! The Singapore Stadium, which was the best option in my humble opinion, (if Martinez had chosen it) would have been majority Filipino for sure. The Azkals would have felt the support of their countrymen!

There is a reason why there is a HOME game and an AWAY game for each semi-finals. Because it is not fair to have home court advantage for both games, which Indonesia had for both games with the Philippines.

I’d like to end it with what my friend J (who used to play for our National Basketball Team) told me: “Ganyan talaga sa International competition (It’s really like that in an international competition). That’s homecourt advantage for you. That’s normal. What I don’t like is, your own countryman preventing you from succeeding like what Martinez did.”

Stay tuned for my post on the unforgettable experience of watching Phil vs Indon Game 2 LIVE!

More about the Azkals/Suzuki Cup experience: