If you were like me last night, rooting for Germany in the Euro 2012 Semifinals against Italy, then Mario Balotelli must be in your s#$% list. However we have to give honor where it is due. The guys scored two goals in 16 minutes. WOW. The funny thing with Mario Balotelli is that as coordinated as he is with a football, he seems to have an ongoing battle against all other inanimate objects. Some videos of him battling with a BIB, struggling with a Christmas Cake and other pictures of his antics. This is my interpretation of his “WHY ALWAYS ME?” T-shirt – LOL! LET’S START WITH MARIO BALOTELLI’S PROWESS WITH A FOOTBALL…

MARIO BALOTELLI VS OTHER INANIMATE OBJECTS (aside from a football)

Mario Balotelli cannot dress himself OR MARIO VS THE BIB 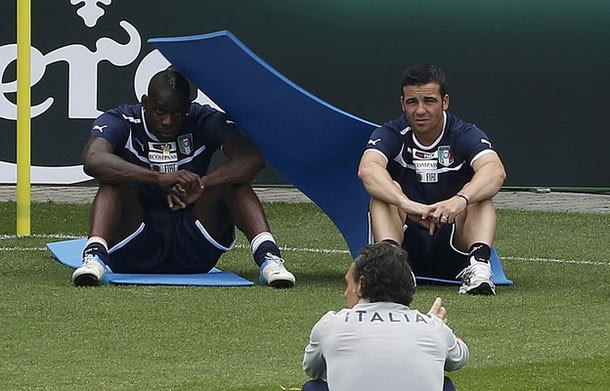 Balotelli is found to be carrying £5,000 in cash at the time of the accident and when police ask why, he reportedly replies: “Because I am rich.”

Balotelli is definitely a character that can’t help but catch attention aye? What do you think of Balotelli and his shirt-ripping-muscle-flexing move? Badass or show-off? Let’s discuss!

Let’s end with this cool video…