What the heck? Was my first reaction to this! I’m sure it’s healthy but I’m not sure how I can get over the gross factor. Is it possible to have so much breastmilk that you have extra to sell? I have no idea…but from the few moms I’ve talked to they have a hard time meeting the supply that their babies need as it is. Hmmm… I hope that the women are not using up their breastmilk for this instead of their babies.  Thoughts anyone?  Article after the jump! 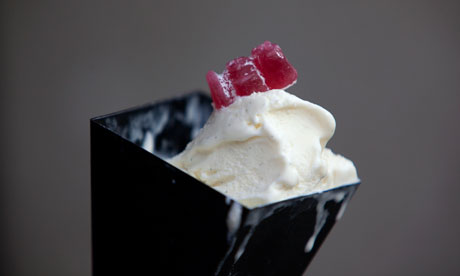 At £15 for every 10 ounces, you could certainly say they’re milking it for all it’s worth.

The treat is made by mixing breast milk with Madagascan vanilla pods and lemon zest. The milk has been donated by women who were paid £15 for every 10 ounces of their bodily fluid.

The dessert is offered up in a martini glass to those daring enough to try it for £14. Liquid nitrogen is also poured into the glass using a syringe.

Despite its unusual ingredient, the company said the “organic, free-range and totally natural” product sold out when launched today.

“The response has been amazing. People at first say it’s disgusting because it’s a bodily fluid, but so is cow’s milk,” said owner Matt O’Connor. “People love it when they try it.”

The company paid women who donated their breast milk after health screening. The Food Standards Agency says there are no specific laws prohibiting businesses from selling human milk products, but they must comply with general food safety laws to ensure the product is safe for consumption.

You can also check out BBC news for more on the women who are “donating” their breast milk on .